"Reach for the hankies - it's the new John Lewis ad!"

The only tears being shed over this travesty are milky ones spurting from the cocks of the light-fingered fuck-sticks who purloined James' film as they wank each other spastic in a circle of self-congratulation. The cunts. 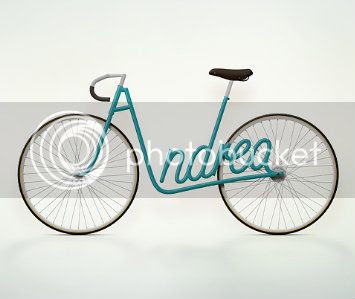 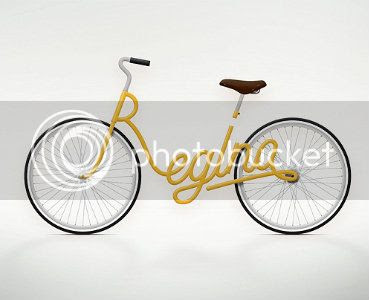 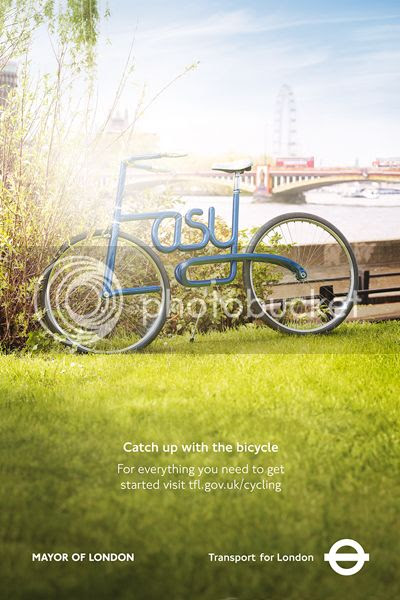 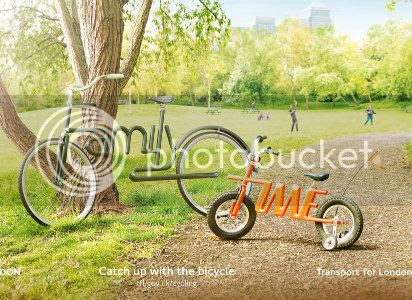 Yes boys, riding a bike is easy. Good point. And so is Googling 'bike' and then clicking a mouse button until you find something that saves you the effort of having a fucking idea of your own. 'Family time'? Yup, there's certainly plenty of that when someone else is doing your job for you. Cunts.
Posted by copycunts at 14:40 No comments:

Big Ideas (don't get any) from James Houston on Vimeo.


YouTube is heaving with films similar to James', but as James' was the first let's call the others 'tributes'. But as Grey's 'tribute' made them a stack of cash none of which is going anywhere near James, let's call it a shameless, lazy rip-off'.

Picture those greasy cunts at Grey flapping their lips in unison as they protest their right to plagiarise. Less a printer orchestra, more a vagina choir.

Original by Will Ferrel & Adam McKay
Rip off by Neal Colyer & Becky Clarke
Neal: Hello Trevor, what's in the bag?
Trevor: Just some Starmix, Neal. Help yourself.
Neal: Cheers Trevor. Oh. This bag seems to be full of others people's ideas mixed in with crumbled up dog shit.
Trevor: That's not dog shit, Neal. Those are the remnants of my creative integrity.
Neal: Oh right.
Trevor: Well, at least my bag's not full of dead snails and broken glass like Becky's.
Becky: That's not a bag. That's my vagina.
Posted by copycunts at 04:16 1 comment:


It's beyond a doubt now that, to Paul, this has become a matter of principle; he will not base an advert on an idea of his own. He simply will not countenance it for a second. As long as other people's ideas are just a mouse-click away, he'll keep sucking them up through that flapping, jowly gob and squeezing them back out into our faces through that halo of ruptured veins he calls an arsehole.
Isn't that right, Paul? I noticed you used 'Money For Nothing' on your little film there. That's your fucking anthem isn't it Paul you raddled old cunt? I can imagine you whistling that in the morning as you hoist a creaking leg up onto your bathroom sink and chuck a load of talc at your gristly old balls. Gets mighty dry down there doesn't it Paul you papery skinned talent-leeching vampiric fuck? And when you arrive at your desk and start the day's YouTube trawl, do you have that on in the background as you earmark the ideas you're going to steal for your next joyless, cynical, piece of shit ad? Course you do.
How the fuck do you still have a job Paul? How have they not cottoned onto you? Every time you put an ad on YouTube the comments go spastic with people accusing you of plagiarism. When are you going to stop? Is this your way of asking someone to kill you, is that it? Is it a cry for help? Tell you what Paul, I'll be a lot fucking happier than the schlubs in your fucking ad when I hear you've bludgeoned yourself to death with one of your ill-deserved fucking gongs. CUNT.

Sir Didymus and Ambrosius from the film 'Labyrinth' 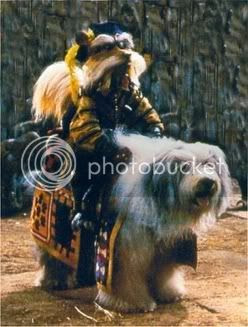 Rip off by Blake Waters & Will Thacker

Big mistake, cunts. It's not just puppets in Labyrinth. You know who else is in it? David Bowie. He's not going to be happy. I wouldn't want Bowie on my scent. He's relentless. Imagine waking up in the middle of the night to the drip drip of cocaine nosebleed on your forehead. You open your eyes and there he is - Bowie; tall bastard with a dead eye looming over you, impossibly standing between your bed and the wall like a legless ghost. But there's no space there, how's he doing that? He's Bowie, that's how. Sweet dreams, nob-joys.
Posted by copycunts at 15:46 1 comment: 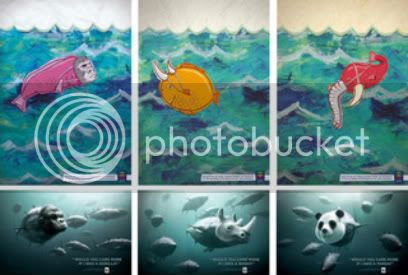 Rip off by Arnaud Vanhelle & Benoit Raynert, live campaign for WWF with the line 'Would you care more if I was a gorilla/rhino/panda?'


This is just too fucking much. If the identical concept and execution weren't enough to convince everyone with half a fucking brain and one functioning eyeball that the Ogilvy campaign is a total steal, the near-identical line should. Plus the fact that Chris and Alexis' had been online for some time before the Ogilvy one came out.

But - those thieving fuckers are still protesting their innocence. Here's my favourite line from Ogilvy's official statement (made in a letter from their lawyer to one representing Chris & Alexis):

“Our work is indeed based on the same idea as the one of your client. But you will agree, above all, that it is not very original to use animals in their environment to talk over the disappearance of animals.”

In other words: "The idea's shit anyway so even if we did steal it, the fact that you even care means all your ideas must be shit, so just, like, shut up yeah?"

Absolute bag of dicks. Just fucking own up to it, have some balls, relish your utter, abject ad-man cuntishness. Don't send a statement through a lawyer. Write it on a just-emptied coke wrap, invite the boys in for a book crit and then staple it to their foreheads while they wait in reception as you saunter past on your way to the whorehouse.

But then I suppose that would require some imagination, wouldn't it? Cunts.
Posted by copycunts at 14:30 5 comments: 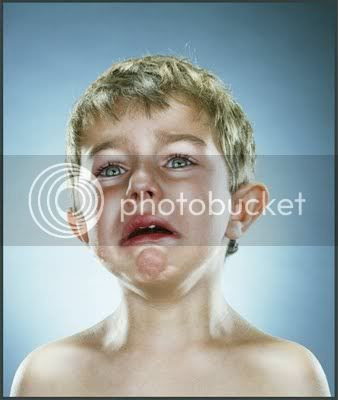 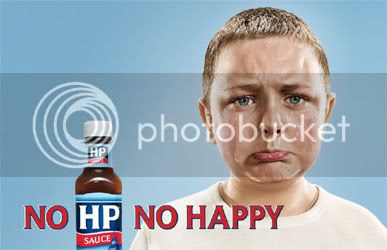 Rip off by Chris Joakim & Mike Doneghey and Woods + Low

Touch the Rainbow? Not if it's the same one you rammed up Ze Frank's anus as you remorselessly raped him like a paedophile clown with a multi-coloured strap-on en route to scooping a fucking Gold Lion at Cannes, you cunts.

Predictable use of the comic idiom employed in the two clips above, providing further evidence of the deterioration of this blog, the writer of which is starting to realise that perhaps there are only so many ways to call someone a cunt.
Posted by copycunts at 13:10 No comments:

Some cunts at Publicis and Nick Jones

Rip-off by some cunts at Publicis and Nick Jones

The creatives responsible for this prolapse-inducing cringefest will remain anonymous for now. I can't find any mention of them anywhere, and believe me, I've been nosing round all over the shop. There's a total information embargo on these fuckers. Even now I imagine they're locked up for their own safety in a Publicis basement stationary cupboard, chin-deep in a soup of each other's tears and shit, praying that Humanity will forgive them for inflicting the lines 'Love those funky biscuits' and 'Hip-hopping Hobnobs' on us. Either that or they've already been 'disappeared' by their Creative Director, renditioned to the McVitie's factory and ground up into little chunks. Don't be surprised if the left molar of the copywriter turns up in a Medley Bar some time soon.

But I did manage to uncover the identity of the director. May I present serial-plagiarist, Nick 'Anything'Jones. The very same Nick Jones who shat the toenail-meltingly awful Mighty Boosh rip-off into our collective faces. Here it is again, for those who haven't seen it, and for those who have but then immediately gouged the memory out of their brains with a teaspoon up the nose:

Oh God, that's awful. 'Sunshine Princess'? Who writes this shit? Henry Challender, since you ask. What a cunt. Anyway, back to Nick. According to the bio on his production company website (from which both the Sugar Puffs and Hobnobs ads are conspicuously absent), Nick started out in TV comedy before moving into ads. To quote: "...he knows exactly where the gag lies, and how not to tread on it or spoof it." Too right he knows where the gag lies; in someone else's fucking idea. Much like the two hapless twats in his ad, it seems Nick has his own special recipe, which I imagine goes something like this:

First, cook up an excuse for what you're about to make. It doesn't have to hold together, it just has to exist. Once you've done that, put it to the side - you'll need it later. Now, take an idea, any idea, it doesn't matter where you find it and sieve out everything that makes it funny or charming in any fucking way at all. Really give that sieve a good old shake until anything that looks like wit or joy has been filtered right the fuck out. When the mixture is almost inedibly bland, glaze it with a thin coating of high-end production values and slide it into an edit suite where you can leave it for about a week, before serving it to a disbelieving nation. Of course it'll make everybody sick, but don't worry - you'll still get paid YOU FUCKING SHAMELESS THIEVING CUNT.

But looking on the bright side, this bowlful of abortion has been a total shitastrophe for everyone involved - even Bass6 the beatboxer has had some shit thrown his way. Nick - cunt. Anonymous cunts at Publicis - also cunts. And not anonymous forever, either. I'm still looking...
Posted by copycunts at 12:19 4 comments: